So I think most people in the cycling world have heard of the Cingles. The challenge reserved for people of a foolish disposition who think it’s good fun to climb Mont Ventoux not once or twice but three times in the same day. But did you know there was an arguably even tougher multiple ascent challenge of an Hors Categorie Tour de France col where the requirement is for four climbs between dawn and dusk?

The Col du Grand Colombier stands at 1501m high and is a few miles north of Chambery and Aix-les-Bains in the Jura mountain range of eastern France. Indeed it’s the highest road pass in the Jura. It has four different ways up it none of which are easy (more of this later) and proving all four ascents in the same day entitles you to become a membership of the Brotherhood or Feles de Grand Colombier. The Col was relatively unknown in the cycling world until making its Tour debut in 2012. It also features as a regular route of the Tour de l’Ain –a Tour de France warm up race and has also featured in the Criterium du Dauphine, another famous pre-TdF race. With a couple of regular cycling buddies (whose Palmares’s included the Marmotte, Ventoux and several Etapes)

I set out one early Saturday morning in July to see if I could slay this dragon as well and join the c800 existing Grand Masters. According to the website then there are only 26 Grand Masters in the whole of the UK.  After spending what seemed like the entire 8 hour drive down from Calais to Aix discussing route options, we plucked to take the ascent from Culoz first.  This was supposedly the easiest (although at 17.4km long with an average gradient of 7.1% I’d hesitate to describe it as easy!) and because this particular climb is South facing and exposed on the lower slopes, perceived wisdom said do this one before it gets too hot! This route also has the increasingly famous ‘corkscrew’ section which is like the Lacets de Montvernier only a bit more extreme.

When the Tour did come up this way then the aerial photos showing the peloton snaking its way up there appeared in pretty much every French newspaper the following day. And you can see why!

After about 1 hour and 40 minutes then we reached the summit and punched our cards (Membership of the Brotherhood is well policed and proof of climbs required. There are orienteering hole punches on the back of strategically placed signposts at both the top and bottom of each climb; there are also local bars and shops who will stamp your card for you).  The top is relatively unspectacular in that it’s quite flat with a large car park (and snack van with random opening hours) but the views from it are incredible over the Lac du Bourget and out over the Mont Blanc massif.

The second climb was brutal. We’d chosen this one on the basis that we’d still be relatively fresh but also warmed up. Slightly shorter at 15.9km, it has a steeper average gradient at 7.8% and whilst beautiful going through the pine forest, the 1.5km stretch at a minimum of 19% (rising to 22% in places) was no laughing matter.  I crawled and zig-zagged my way up to the top – no records broken but no foot down either! I did believe on this climb that doing all four in a day might be impossible if the remaining two were like this one.

Route three was the longest of the day at 19km with an average of a ‘mere’ 6.9%. Whilst easier than the brutal number two, the legs at this point were getting pretty tired and even this mountain was a real test. It’s also one of those ‘annoying’ climbs that every cyclist dreads where it has flat and even some downhill stretches, and then a couple of kilometres at over 10%. In other words there was no chance to get into a rhythm…

…but thankfully the end was in sight with the final ascent from Anglefort. At 15.4km long but with an average of 7.7% this again provided a sting in the tail of some very weary legs but at about 1620  (we set out at 0640) we crossed the line for the fourth and final time, the obligatory photos and stamping, and some well-earned cold drinks from the snack van before the steady roll down the hill back to the car in Culoz.

I think it’s fair to say we were all absolutely shattered at the end. I’d say that the overwhelming emotion was one of relief – relief that we wouldn’t have to climb anything more that day! Was it worth it? Well I’m still waiting to receive my medal but I’d definitely say yes – if only to be able to scoff at people boasting at their Cingles – that being ‘only’ three climbs in the same day! Logistically it was pretty easy to do – a circular ride and a handy car park outside the ‘Maison du Velo’ in Culoz made travel to/from very straightforward. The snack van at the top provided cold drinks, snacks and plenty of words in French of encouragement each time we returned there! There were fountains in villages along the way and shops/cafes in at least three of the starting villages. There is not much traffic on the mountain but there are I think four days each year where one of the routes is closed to all except cyclists.

But the best thing about it could just turn out to be quite special. Although my French is a little rusty, I definitely heard the snack van owner at the top say that they were planning to include the Culoz ascent (complete with corkscrew) on the 2020 Tour de France route as a mountain time trial. Now watching that next year and re-living our experience would be something else although it will mean that my Strava segments disappear even further down the leaderboard. Allez the Brotherhood! 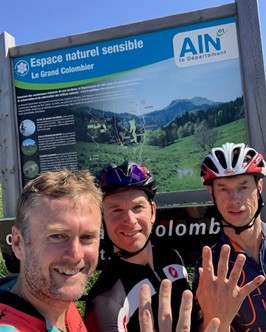