Ever since I heard about Les Confrerie Des Fèles Du Grand Colombiere I had dreamed of becoming a Grand Maitre. I had cycled the col before and watched the Tour du France go over the top and knew that I could do it.

So I filled in my application and waited for the weather and my time and fitness to be right.

Finally on my birthday the 28th September 2014 I was ready. I knew it was going to be a very special day. What better way to celebrate my 54th birthday!

I am very fortunate to own a 6.7kg light Cannondale Supersix with Sram Red components so that helped. It is fitted with a compact pedalier with 30/26.

This was not enough and a triple would have been better for me, but luckily after a summer of cycling I had the leg strength to get up the superior percentages!

I carried 4 power bars, a wind proof gilet, and a torch for the last descent. Stupidly I had forgotten my water Bidon so I had to buy one of those plastic Vittel bottles for water. This was nice and light but more difficult to drink from and twice it fell out from my bottle cage.

I started from Culoz because it was closest to where I was staying and also because of the recommendation by Michel Pelissier.  At 10am I was late starting and already the autumn sun was hot. I could only imagine what it must be like in July. It is a spectacular road though with its tight corners and huge towering cliffs and it is no wonder that the TdF chose this route up. I was conscious not to start too fast even though I felt very good. It was a beautiful clear sunny day and it was after all my birthday. Nevertheless I delighted in overtaking three other cyclists on the way up and got to the top in under an hour and a half. The views were stupendous and I had a break and took some photos and watched several other cyclists arriving. I found myself wondering if any of them were also attempting to become a Grand Maitre of Les Confrérie des Felés Du Grand Colombier.

I loved the descent in the sun and could not believe how steep the 19% road was and how narrow and long it was. Would I be able to pedal up it with my compact? I began to doubt myself.

At Artemare I stopped at the Hotel Michallet where the chef stamped my carnet. He seemed to know all about the Confrérie and he looked at the time and told me. “ Il faut tu depeche.”  So again I set off a bit fast and was soon at the base of the steep section. I had to get off the saddle and stand on the pedals. It was so steep. I resorted to zig zagging across the road. At one point two other cyclists came down towards me fully concentrated on brakes and balance. There was a brief moment of silent communication. Yes we were mad! Near the top of the steepest part I caught another struggling cyclist and was surprised to see that it was a young girl. She made it as well. After the Carrefour I made good time and got the top in just over an hour and a half from Artemare. I love that last kilometer above the trees with the cross up above and the view of the valley below and cows grazing nearby. Little did I know what was in store for me.

There was a wind at the top so I dropped down to the refuge for a coffee and delicious Tarte au Myrtilles before my descent to Anglefort. The twisting road was dangerous with gravel and again I marveled at how long it was. At Anglefort it was hot like in summer and luckily I found drinking water in a small park by the side of the road. I had been drinking about a litre per climb but it was still not enough. I found the climb up from Anglefort to be the hardest. It was a steady steep sustained turmoil not made easier by the noisy motorbike gangs and the afternoon sun. I was glad when I was above the trees and I amused myself by reading the names written on the road from the Tour de France. Wiggins cry4 Cadel! I had been there and at that area below the refuge there had been a huge tent with a TV and bars. It was the best bicycle party I had ever been to, especially after Tomo Vöekler won the stage. I got to the top for the third time again in roughly an hour and a half. It was now 4pm and I was tired and I knew it.

I had to keep going and I hoped I would find something to eat and drink at Champagne-valromey. When I arrived there it was all closed up and very quiet it being a Sunday. I found a Messieur to sign my card as proof that I was there, filled up my Vittel bottle at the fountain and set off for my fourth climb of the day. I was tired and beginning to feel fatigued but it was a beautiful evening with low light and high above me I could see the top of the pass. It was my birthday after all and I was about to become a Grand Maitre of Le Confrérie Des Feles Du Grand Colombier.

It is a good quiet road up past the pretty village of Lochieu with its Church and not too steep until you get into the trees. I tried to keep my cadence but I seemed to be pedaling more slowly. My garmin watch ran out of power at this point so I had now idea how I was doing. I found the steep 14% section very hard. It was here in the TdF that Nibali attacked on the descent! My legs were now so tired I was worried about getting cramps. My breathing was shallow and labored.

The sun was going and I watched it move up the mountain shining on the silver cross. In my haze of fatigue this somehow gave me strength. As I came out of the trees and crossed the two cattle grids with 2kms to go I suddenly hit the wall. I was finished. In England it is known as to “bonk.” There was no more glycogen left in my body. My pulse rate dropped. My breathing became shallow. I started to lose my sense of balance. My mind started to shut down as if I was drunk. I knew that if I got off the bike I would not get back on. I had to focus on pedaling and trying to keep going in a straight line. That spectacular last steep ramp of a kilometer became one of the hardest I have ever done. Once I nearly hit an oncoming car because I could not ride in a straight line. Somehow I made it and I remember rounding that corner with the poles and seeing the line across the road and seeing Mont Blanc glowing in the distance.

What a feeling! What a birthday! I had successfully become a grand Maitre of the Confrérie Des Feles Du grand Colombier. 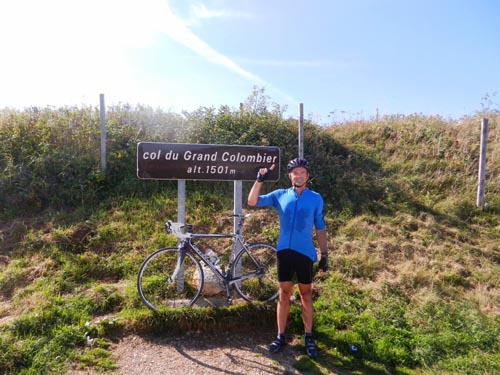